Rick Duncan initially started coaching athletes when he reduced his own competition and training commitments in the late 1990’s. In 1998, he began using his competition experience as a coach, initially in the R&R arena before moving back into surf craft.

He progressively undertook all of the prerequisite courses through Surf Life Saving Australia and in 2006 he completed his Level 3 coaching accreditation.

In 2008 he established the Australian Surf Ski Coaching and Development Academy on the key initiatives of providing surf lifesaving clubs and individual surf ski and board paddler’s within his own state of Western Australia knowledge and experience in the form of specific training programs, technical paddling information and mentoring to coaches and athletes.

This higher level of knowledge and sports science coaching information was not available in the past to the general club paddler or it was limited to a few talented paddling athletes who trained with the Western Australian Institute of Sport in the sprint kayak program, it was definitely not forthcoming to a surf club coach or club surf ski paddler. As a direct result of asscada coaching across clubs program the greater knowledge with better results was achieved through sound management with open and transparent training programs available for both clubs and athletes interested in their development as either athlete or coach. The coaching programs have not been limited to board and ski athletes but have evolved and been adapted to include all surf sports disciplines.

Many athletes both male and female who started with the program have gone on to have success as international athletes at world championship in both surf lifesaving and sprint kayak.

It has been from the success of these international athletes that the Rick Duncan Academy was established in 2016 after inquiries from outside of Australia in recent years to provide and help with similar training programs, structure and competition knowledge to improve their own individual and or national teams performances.

The success of the Rick Duncan Academy program has achieved; 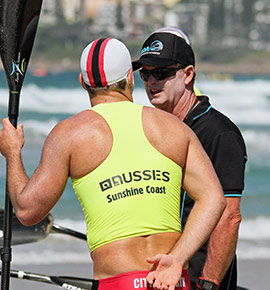 Geographically I’m a long way away from my coach, Rick Duncan, but the distance is immaterial. He’s on hand whenever I need him.